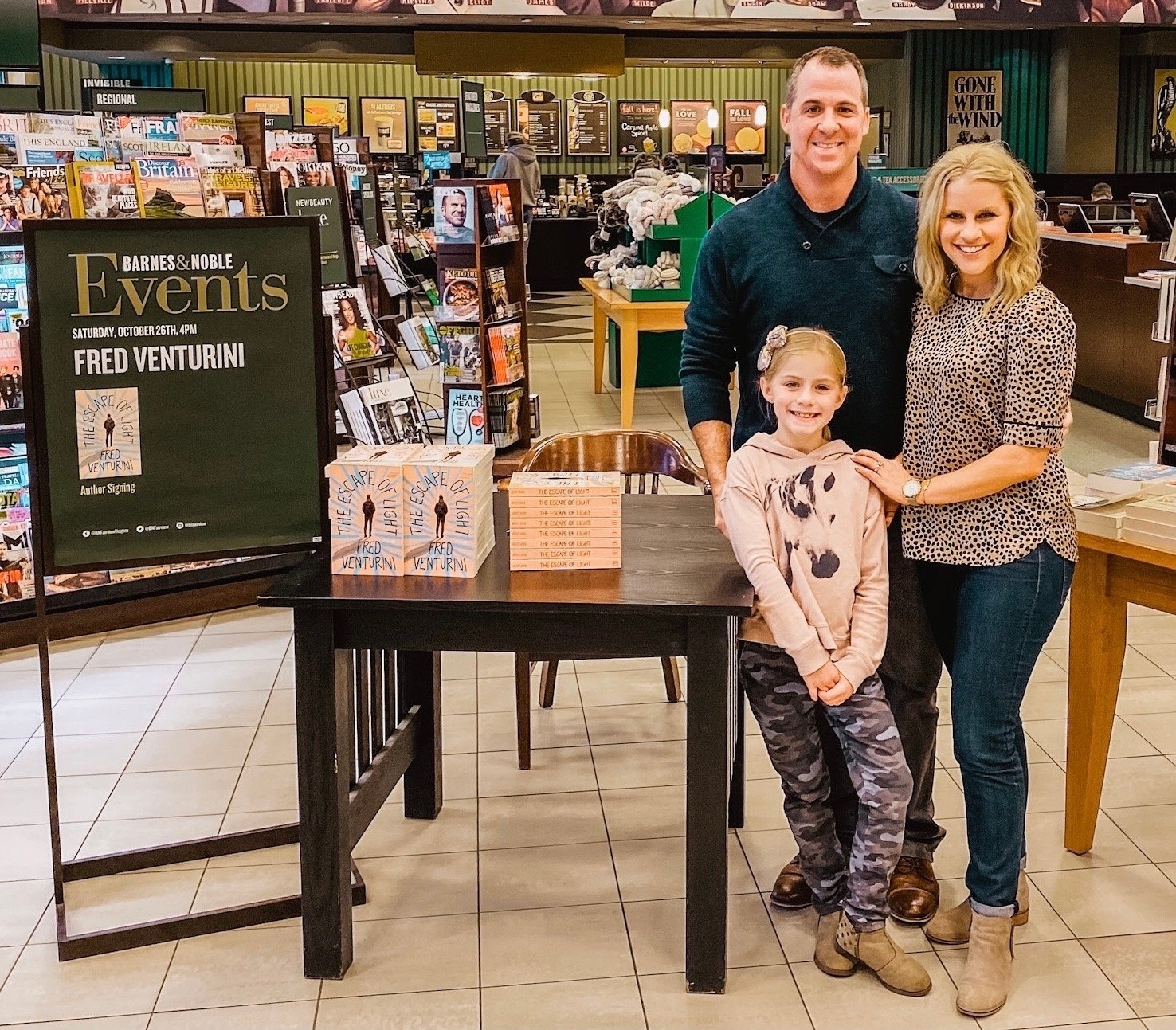 Fred Venturini has been set on fire, maimed, and crushed in a multitude of incidents. In case you're wondering, no one has tried to cut his head off like one of the immortals in Highlander to see if he can A) die and B) have his power absorbed by someone else.

Always in constant recovery from something during his teenage years, Fred wrote THE HEART DOES NOT GROW BACK, about a kid, Dale Sampson, who can regenerate his organs and limbs. Only they grow back slowly, like a shitty wolverine. When he starts to give them away on a reality show, it's a race to see who can destroy him first: himself, or a thirsty public used to grinding up celebrities for entertainment purposes.

The New York Times, Donald Ray Pollock, Stephen Graham Jones, Nick Cutter, and others had lovely things to say about the book, which was destined to be a movie until it wasn't.

In 2019 he released THE ESCAPE OF LIGHT, about Wilder Tate, a burn survivor who discovers a knack for basketball, and catches the eye of the coolest girl in school. All the cruelty and bullying seems reserved for the enigmatic Lane McKenzie, and Wilder is all too happy to let her take the heat. But sometimes Wilder is his own worst enemy, and his scars run far deeper than just physical damage. He’s haunted by a secret he thinks he can erase with a bold and risky plan to fix his disfigurement for good—a plan that may cost him far more than he ever imagined.

"The Fault in Our Stars" meets "Rocky," this YA story Fred just had to write because he was once set on fire was called a stunning read by Kirkus, and was nominated for the Gateway Young Readers Award.

Then, in 2021, he unleashed TO DUST YOU SHALL RETURN, a John Wick by way of John Carpenter action/horror hybrid that got Chuck Palahniuk to say, "Venturini doesn't write in words and sentences. Instead, he lines the page with barbwire, concertina wire and spike strips that deliver the story deep into the reader's skin." Fred's a big Chuck fan so this one goes on the mantle. High praise also followed from horror outlets like Fangoria, who called Fred an author who "makes genres his own." Which is a nice.

It's not a movie yet but if it were, this would be the logline: a ruthless mob enforcer with a particular set of skills joins forces with a plucky and courageous teenage girl to save a small town from the depraved whims of an occult leader with supernatural powers.

Fred lives in the Greater St. Louis area (Illinois side) in a small town with his wife and daughter, where he patiently waits for the Bears to check a Super Bowl victory off of his bucket list.

Contact Fred directly at venterminator@gmail.com - he's not so big that he doesn't literally respond to every single email that comes his way. Eventually.

For movie/tv rights, contact his manager, Peter Katz at peter@story-driven.com

If you ever meet him in person, he'll gladly go over all the scars and how he got them.